Time to walk the talk on equality: Human Rights forum 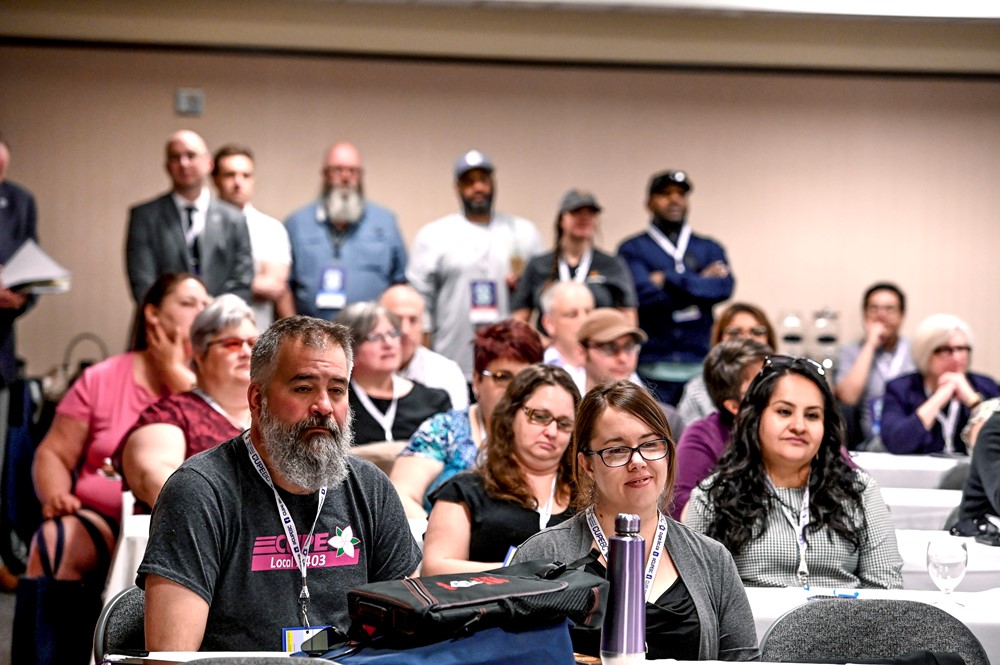 VICTORIA - CUPE locals and their leaders need to be more proactive in reaching out to equity-seeking members and recruiting them for leadership positions, delegates at Wednesday’s packed Human Rights Forum were told.

A panel discussion chaired by CUPE National Human Rights representative Cheryl Colborne featured four speakers representing the union’s equity-seeking groups. The discussion focused on barriers to participation in CUPE, how equity-seeking members can overcome those barriers, and what locals could do to increase opportunities for those members to become leaders in CUPE.

In his welcoming remarks, CUPE BC President Paul Faoro said the forum was an opportunity for the union to receive guidance on how to strengthen itself through an equality lens.

“I want to make sure that everyone has an opportunity to be in a leadership position,” said Faoro. “We will never stop trying to get more people involved, and reducing barriers is so important.”

Local 2278 President Laura Bulk said a major barrier to her own participation was ignorance of equity-seeking workers’ concerns.

“Policy change is important, but access isn’t enough to be included,” said Bulk, representing persons with disabilities. “In order for us to create a place where everyone belongs, we need to change people’s hearts.”

Part of this means checking your assumptions at the door. Rather than assuming what a person with a disability can or cannot do, Bulk said, co-workers need to be more open to asking questions and learning from a non-ableist perspective.

CUPE 1936 President Sheryl Burns, normally accustomed to discussing barriers to leadership based on her work as an activist on disability issues, represented Pink Triangle (LGBTQ2+) workers on the panel.

“My initial barrier to more union involvement was fear of being exposed as a lesbian, because I was very aware of homophobia in society,” said Burns, who had been married for 18 years with two children and was terrified of coming out of the closet after already facing barriers due to her hearing disability.

Burns said she ultimately chose to come out because being able to “pass” for a straight woman gave her an advantage others didn’t have.

“As a feminine-looking lesbian, I have privilege,” she said. “So it occurred to me that if I believe in advancing equity causes, then I need to take this risk.”

CUPE 15 President Warren Williams was representing Indigenous Workers but told delegates he had a multi-ethnic background that also included Irish and French roots and most identified with the black culture in which he was raised. He said he was lucky not to have experienced a barrier to participation in CUPE.

“I didn’t feel like I had a barrier to getting involved with CUPE 15, because it’s a very diverse local,” he said, adding that he was approached by others who encouraged him to get involved—former CUPE 15 President Paul Faoro chief among them.

Instead, the biggest barrier was being labelled ethnically.

“I should not have to explain who I am to you, or you to me,” he said, noting that workers of colour sometimes experience more interest in their race than in what they have to offer.

CUPE National Diversity Vice-President Yolanda McClean, representing Workers of Colour, recalled the disillusionment she experienced the first time she faced a barrier at work. Hired after a phone interview to be a children’s storyteller, McClean was transferred upstairs to the receiving department—and invisibility—after the person who hired her over the phone arrived at work to discover she was black.

“I couldn’t stop crying, because I was actually experiencing a barrier for the first time,” she said. “It took me six weeks to figure out that I was being discriminated against and couldn’t go down to the third floor because I was black.”

The importance of solid allies

When asked what barriers they had overcome to move into leadership positions in CUPE, and how they overcame them, the panelists all spoke of the importance of strong allies.

For Burns, the fear of exposure as a lesbian was overcome with support from her fellow union members, particularly late CUPE 1936 President Michael Lanier.

“As a lesbian, it was always the moments of choice that I had to make: who do I come out to? I was constantly having that internal dialogue,” she said. “Michael saw me for who I was. He advocated right along with me, in terms of removing barriers.”

Williams spoke of the influence of his family in overcoming the barriers of racism while growing up in Winnipeg.

“I was raised by very strong women, and very strong men,” he said. “I learned very young that you don’t have to put up with what’s wrong. You can stand up.”

“It takes leaders in the CUPE family to say ‘It’s time to move aside. I’m moving aside for you’,” she said. “This is what makes great leaders: when we get there, to turn around and bring someone else up. There’s room at the table for all. We just have to figure out when that is and how that will happen.”

Bulk said that the support of other union leaders at her workplace, such as CUPE BC General Vice-President Karen Ranalletta, has helped educate other members about working with someone who is vision impaired. Allies can help others learn how to ask questions rather than making assumptions: “How to approach with humble curiosity. Not ‘Tell me how you ended up in a wheelchair.’ But ask people to share their stories, and try not to look shocked.”

Panelists were finally asked what locals could do to increase opportunities for equity-seeking members to become leaders within CUPE.

“The simple answer is that you have to get out there and talk to your members,” said Williams. “You have to take initiative, as a leader, to find people to sit on the executive.”

McClean said that talk is fine, but equality and fairness has to come in writing: “We have to put these things in our bylaws. Without employment equity, it’s going to take a lot of time.”

Bulk advocated flexibility in union proceedings: “Thinking about how we can make this position flexible, is it a challenge to require someone to sit upright for three hours in a meeting? Or could we do a Skype call? Does someone need a note-taker for them in that meeting?”

Burns stressed the importance of acknowledging people and seeing them for who they really are.

“Part of achieving equity for our members is understanding that they are the experts of their situation. It’s imperative as leaders that we know they have challenges but see their capabilities. We need to take risks on their behalf. A lot of our members won’t like it, but what you’re doing is levelling the playing field. And as a labour movement it’s incumbent on us to level the playing field.”

After questions from the delegates, McClean closed the forum with a quote from Rosemary Brown: “We must open the doors and see to it that they remain open so that others can pass through.”