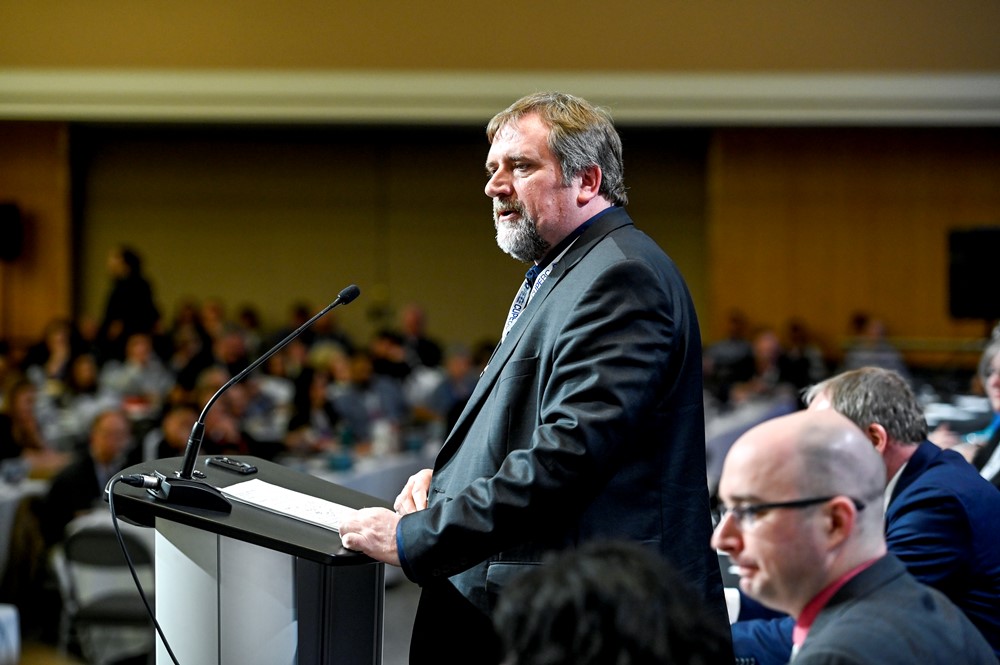 He pointed out that with the recent election of Jason Kenney as premier of Alberta, “from here in BC you now have to go all the way to Nova Scotia to find a provincial government that isn’t Conservative.”

“And rather than saying one thing and doing another like so many other politicians, we're lucky enough to have Premier John Horgan here in British Columbia who puts his money where his mouth is.”

Turning to the national scene, Hancock saluted the successful organizing drives—including 3,000 West Jet flight attendants—that have seen CUPE grow its membership significantly in the past year. Now with more than 680,000 members, CUPE remains the largest union in Canada.

Hancock said that the labour movement in general, and CUPE in particular, need to do a better job of reaching out to and helping members experiencing addiction or mental health issues. “We must treat mental illness just like we would a broken limb or heart disease. It is long past time for our healthcare system to provide the same depth and breadth of resources to mental health care as they do for physical health care. Without judgment, and without stigma.”

With the next federal election looming, Hancock urged delegates to work with the federal NDP to elect as many MPs as possible to join Jagmeet Singh in Parliament. “It feels like just yesterday Stephen Harper was swept out of office. But since then, we’ve seen a wave of backwards-looking, right-wing premiers who have been elected across Canada in the past three years.

“And we can't afford to elect any more Conservative governments in Canada,” he said. “We can't afford to have Andrew Scheer, the so-called ‘Stephen Harper with a smile,’ sitting in the prime minister's office.

“But let's remember that Justin Trudeau and his Liberals are not our friends either. We saw what they did in December to the postal workers—workers who experience some of the highest levels of workplace injury in the country, and who were on strike to demand safer workplaces.

“What was Trudeau's response? It was to bring down the legislative hammer and force them back on the job.

“My friends, there's only one party that's going to look out for workers in this country, and it's the NDP,” said Hancock. “We need to elect Jagmeet Singh and a strong team of NDP MPs to make sure workers’ rights and the concerns of working Canadians are front and centre in the House of Commons.”

Hancock concluded his remarks by urging delegates from Nanaimo and the mid-Island region to support the NDP’s candidate in the Nanaimo-Ladysmith by-election. “Election Day in Nanaimo-Ladysmith is on Monday—and it’s an opportunity to elect an amazing First Nations leader, Chief Bob Chamberlin.”