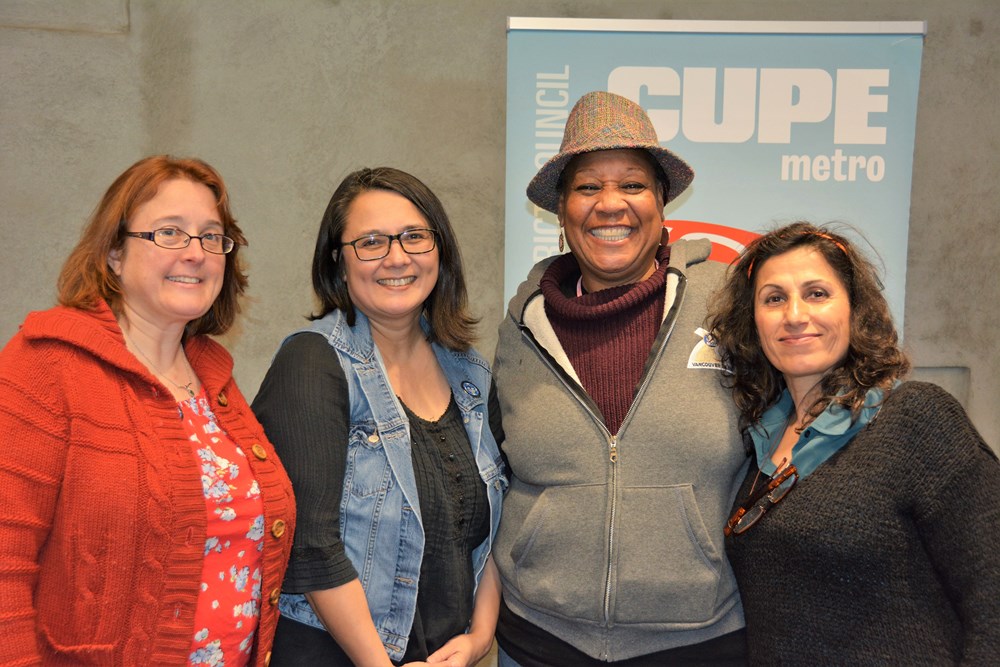 SURREY – Women from the Metro Vancouver District Council hosted their annual International Women’s Day (IWD) lunch in Surrey last Thursday. The event is hosted in a different community each year and focuses on bringing activists and community members together to celebrate and honour women.

This year’s event opened with a blessing from CUPE 728 member Chandra Antone, and the reading of “Not One Step Back” by a group of female CUPE Metro volunteers.

Shelley Sage Ricci, Indigenous Workers Representative for the BC Federation of Labour and CUPE 728 executive member, then spoke about the meaning of International Women’s Day and this year’s theme #PressForProgress.

“International Women’s Day is all about unity, celebration, reflection, advocacy, and action – whatever that looks like globally and at a local level. This year the campaign theme is #PressForProgress – a strong call for collective action to establish gender inclusivity around the world.”

Ricci defined the difference between inclusivity and equality saying that “we need inclusivity to wrap our arms around each other, and to lift each other up no matter your skin colour, your economic level, no matter if you’re born with female parts, or come to identify as female through your earth walk, we need to band together and we need one heart and one mind. We need allyship.”

CUPE 402 President Jeannie Kilby also spoke and shared some of the actions the BC Government has recently taken to help make positive change for women. This includes:

Kilby also shared a bit of her personal experience as the first female labourer in the City of Surrey’s outside workforce almost 34 years ago.

“I didn’t enter into that work situation expecting to change the workforce, I went to work everyday and just wanted to do my job to the best of my ability and to be treated equally and fairly. I’m happy to say that the City outside workforce did change and today we have over 40 full time women working in non-traditional roles.”

Following lunch Vanessa Richards led participants in singing a variety of songs that highlighted the strength of women working together. All attendees were also sent home with a package filled with food and personal items.

“We’re so grateful to the CUPE Metro delegates who help put on this event,” said Sarah Bjorknas, CUPE Metro Recording Secretary and one of the event organizers. “We all look forward to doing this every year as an opportunity to work together and to welcome women and children from the community and share lunch with them. All of the great skills and hard work the volunteers bring creates a beautiful, celebratory and safe space for women.”