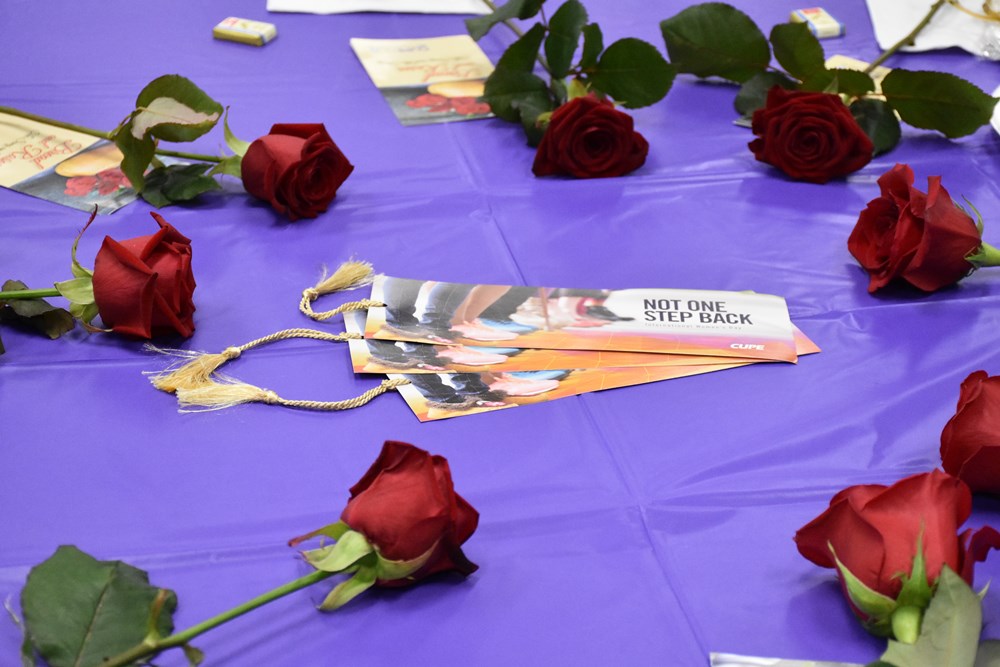 BURNABY—CUPE Metro invited women from Burnaby and New Westminster to celebrate International Women’s Day on March 5 at Bonsor Recreation Centre. Elder Joy Dockrey from the Cree Nation, whose traditional name is Small Black Thunderbird, opened the event with a prayer. She welcomed and thanked all “beautiful life givers” and shared a Cheyenne proverb: “A nation is not conquered until the hearts of its women are on the ground. Then it’s finished, no matter how great its warriors or how strong their weapons.”

Dockrey—whose service dog Mikey was a big hit with participants—recalled working at Surrey Hospice for 20 years and at the Surrey Women’s Centre where she still volunteers, working with women who are desperate and hopeless. Saying the most important thing is unconditional love, she noted that Indigenous culture is traditionally very forgiving and encourages understanding and reconciliation. She concluded by leading everyone in singing “The Women’s Warrior Song.”

Elba Bendo from West Coast Legal Education and Action Fund (LEAF) and entertainer Vanessa Richards completed the afternoon program. Richards, a musician, interdisciplinary artist and founder of Creative Together, demonstrated a fun voice warmup exercise using straws.  She led everyone in singing a simple song for Mother Earth (Belle Mama, Eh!) both as a group and in rounds. The audience sat in a circle and everyone shared something that they loved to do every day before hearing from LEAF director of law reform Elba Bendo.

Bendo talked about the important services that LEAF provides to women and families around gender-equality issues including law reform, community engagement, and the child protection system. She talked about her work advocating for women’s rights and current LEAF cases. The session was interactive with participants having questions answered throughout.

When asked about LEAF’s involvement with the provincial government and legislative reforms, Bendo talked about a recent big win on reforms to employment standards legislation to include five days of paid leave for those who have experienced domestic violence and sexual assault.

“One of the main reasons people don’t get the support they need when they experience violence is financial [challenges],” said Bendo, noting that finding housing and other resources, getting counselling, and leaving your job are big hurdles. Having five days of paid leave will make a big difference for women and families.

The event closed with Vanessa Richards telling a story before leading a song about Julian of Norwich, a radical woman of faith during the Middle Ages who popularized the words “all shall be well” and wrote the earliest surviving book written in the English language.

CUPE Metro President Sarah Bjorknas from CUPE Local 23 noted that this is the eleventh year that Metro has held International Women’s Day events in various communities throughout the Lower Mainland. “CUPE Metro really loves putting this event on every year and inviting the community to the celebration,” said Bjorknas. “It’s a grass roots event.”