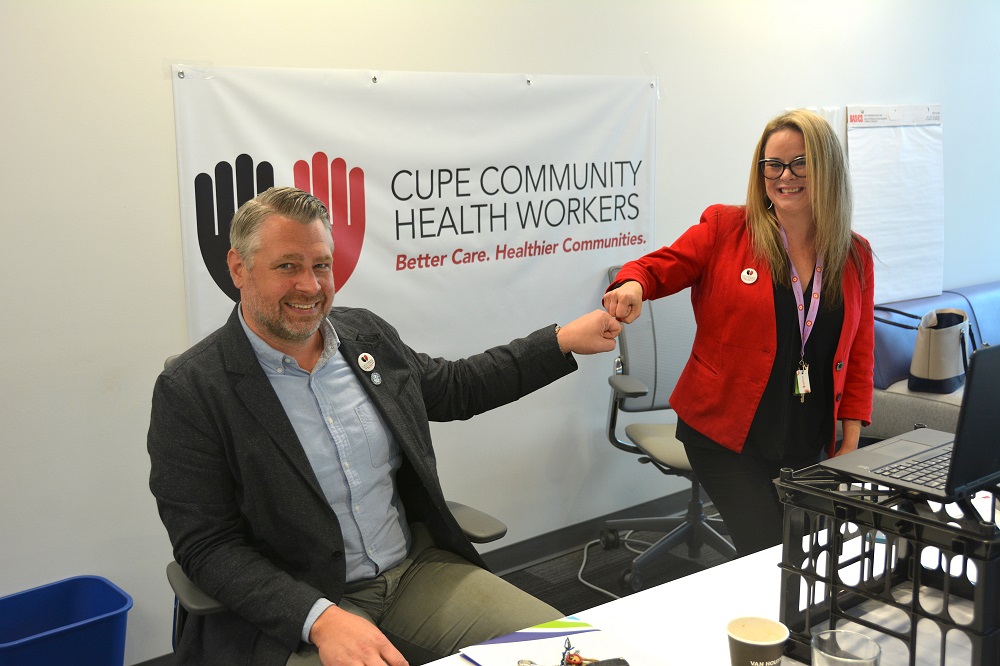 CUPE 1004 President Andrew Ledger, hosting the conference as chair of CUPE’s Health Care Presidents Council (HCPC), thanked delegates for the valuable public service they provide and all CUPE health workers for their daily efforts in keeping British Columbians healthy and safe during the COVID-19 pandemic.

“Now more than ever, CUPE health care workers are fired up to enter into collective bargaining,” said Ledger. “During the pandemic and moving forward, it is critically important that our members’ interests are well represented and articulated so that we can make the most gains possible, not only for ourselves but for the public and our health care system in general.”

Regional Director Ann Lennarson reminded delegates that CUPE’s B.C. region has their back and will provide full staff resources and support throughout the bargaining process. CUPE BC President Karen Ranalletta, noting the history of coordination between the union’s political and servicing operations during bargaining, said the strong relationship between the B.C. Division and CUPE National is an important asset.

While CUPE BC may not have a direct role in bargaining, said Ranalletta, the Division can be helpful when negotiations reach an impasse and issues can’t be resolved at the table. “We have shown we can make a difference in many ways,” she said, “up to and including mobilizing public and political support in the event of a strike or lockout.”

Keynote speakers Audrey Guay and Edith MacHattie of the BC Health Coalition described the role of the Coalition and its relationship with labour in defending public health care. Citing campaigns for primary care reform, critical efforts on behalf of seniors’ care, and the successful court challenge of the private Cambie clinic, Guay and MacHattie stressed the importance of the health care system remaining public—especially during a pandemic. They also addressed COVID-19’s impacts on health care workers, including workload, understaffing, burnout, and mental health. Bargaining for better provisions on issues like paid time off and sick leave, they said, can make a difference for everyone.

“You’re not just fighting for yourselves,” concluded MacHattie. “The public needs you to be healthy and well so that our public system is strong and improving.”

Narrowing down the priorities

The BCGEU’s Richard Tones, representing the CBA, and HSA’s Josef Rieder, representing the HSPBA, described their respective roles at the two association tables. They also outlined priorities shared by their own unions and other constituent unions in the associations. During their presentation, there was a discussion about logistics surrounding the question of whether bargaining will take place virtually or in person.

CUPE Research Representative Carissa Taylor presented the results of a member survey on health sector bargaining priorities. Some of its key findings corresponded with an earlier survey on workload and mental health in the sector. This became a major theme through all the conference discussions: bargaining efforts should focus on improving supports for CUPE members’ mental health, particularly in light of workplace pressures that have been amplified by the pandemic.

Before the break, CUPE Health Coordinator Tanya Paterson reminded delegates of CUPE’s national bargaining policy, which prohibits concessions or two-tiered agreements. Along with priorities established by the two associations, the next rounds will also incorporate national bargaining policy to include proposals related to workplace and domestic violence language improvements, as well as improvements to precarious work and union leave language.

For the afternoon session, delegates separated into breakout rooms for CBA and HSPBA members. As well as setting the top three bargaining priorities for CUPE members in the respective associations, delegates elected CUPE representatives to the two bargaining committees. For CBA negotiations, CUPE’s representatives will be Andy Healey (CUPE 1004) and Liza Taylor (CUPE 15), with Shaunah Cairney (CUPE 3403-01) serving as alternate; for HSPBA negotiations, the representatives will be Jennifer Kassimatis (CUPE 15) and Angela Wheeler (CUPE 1978), with Brian Moore (CUPE 15) serving as alternate.

In the wake of the conference, bargaining committee representatives will participate in bargaining training, including strategic bargaining plan workshops and job action preparation.

“We’ll be rolling up our sleeves to increase member engagement and solidarity in advance of the bargaining process,” said Paterson. “It’s exciting to be working with such a diverse group, knowing how much their collective experience and knowledge will contribute to CUPE’s strength at the bargaining table.”