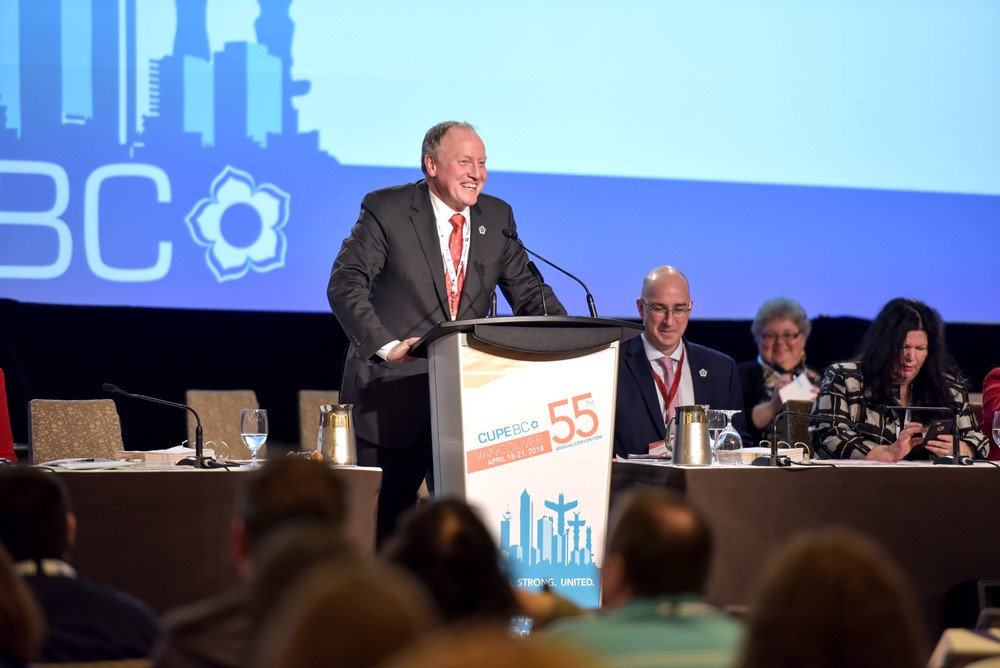 VANCOUVER—CUPE BC’s 55th annual convention opened Wednesday night in Vancouver with more than 400 delegates celebrating a year of significant accomplishments and looking ahead to challenges in the coming year.

CUPE BC President Paul Faoro told delegates in his opening night address that the efforts of CUPE members in communities across the province helped rid B.C. of Christy Clark’s BC Liberal government in last May’s election.

“We came out of last convention with just 11 days until the election, and CUPE members answered the call on the final sprint to election day,” said Faoro. “Because of your hard work we defeated Christy Clark’s corrupt government and replaced it with a progressive BC NDP government that’s there for working people, not the wealthy and well-connected.”

Faoro said he was looking forward to hearing from Premier John Horgan in his keynote address to convention on Friday, and noted that in just nine months in office the new government had already made significant progress on issues important to CUPE members.

“From beginning the process of raising the minimum wage to $15 per hour to eliminating tuition fees for foster kids aging out of care, Premier Horgan’s government is taking action to make government work for people,” said Faoro. “And the billion dollar investment in an affordable, accessible and quality child care program is great news for families, communities and the economy.”

Highlighting CUPE BC’s priorities for the next year, Faoro pointed to the upcoming referendum on proportional representation and the local community elections in October.

“It’s time we change our electoral system to one in which every vote truly counts,” said Faoro. “So CUPE BC will be campaigning strongly in favour of a “yes” vote, whenever the referendum happens.”

Faoro said the recent changes to local election finance laws mean that CUPE BC will have to adopt a new way of working to elect progressive candidates in October, and encouraged delegates to participate in their local labour council endorsement process.

“We need to use new technology and innovative campaign tactics and combine them with the tried and true organizing methods of the past. Together we must take action to support incumbent progressive local leaders, as well as new progressive candidates, and we need to take on the right-wing politicians who don’t support public services—or the workers who deliver them,” he said.

“CUPE BC is in the strongest position we’ve ever been in. We have the resources, the numbers and the strength to take on any fight that comes our way.

“I want to close on a message to employers across this province. If you take us on, even the smallest local, you take on all of us. If it comes to a lock out or strike, know this: we will last one day longer than any boss.”