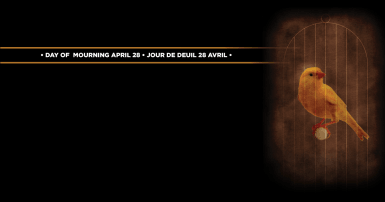 BURNABY – This year marks the 34th annual Day of Mourning where workers, families, employers and communities come together in ceremonies to honour workers who have been killed and injured and where we renew our commitment to health and safety.

Last year in BC there were 158 work-related deaths, including two CUPE members. This year we remember Wayne Hornquist (Local 2093) and Lloyd Smith (Local 873) who were tragically killed in a workplace accident while making emergency repairs to the refrigeration plant at the Fernie Memorial Arena.

“It’s vital that we remember, mourn and honour every one of the lives lost due to workplace accidents or illness, and it’s equally important that we fight for the political change needed to ensure every worker returns home safe at the end of the work day,” said CUPE BC President Paul Faoro. “The new BC NDP government is making progressive changes to WorkSafeBC to ensure that workers—and worker safety—are truly at the centre of what WorkSafeBC does, a welcome change after 16 years of BC Liberals putting employers first.”

The Day of Mourning, which was created by CUPE members, was first observed in 1984 and is now recognized by workers across Canada and in more than 100 countries worldwide.

This year, the day of mourning falls on a Saturday. We urge CUPE members to observe a moment of silence and lower flags to half-mast on Friday, April 27, and to attend a community event on Saturday, April 28.

A complete list of Day of Mourning events happening in BC can be found here.