‘I will continue to be your partner in progress, and our government will keep fighting for people’—Horgan to CUPE BC 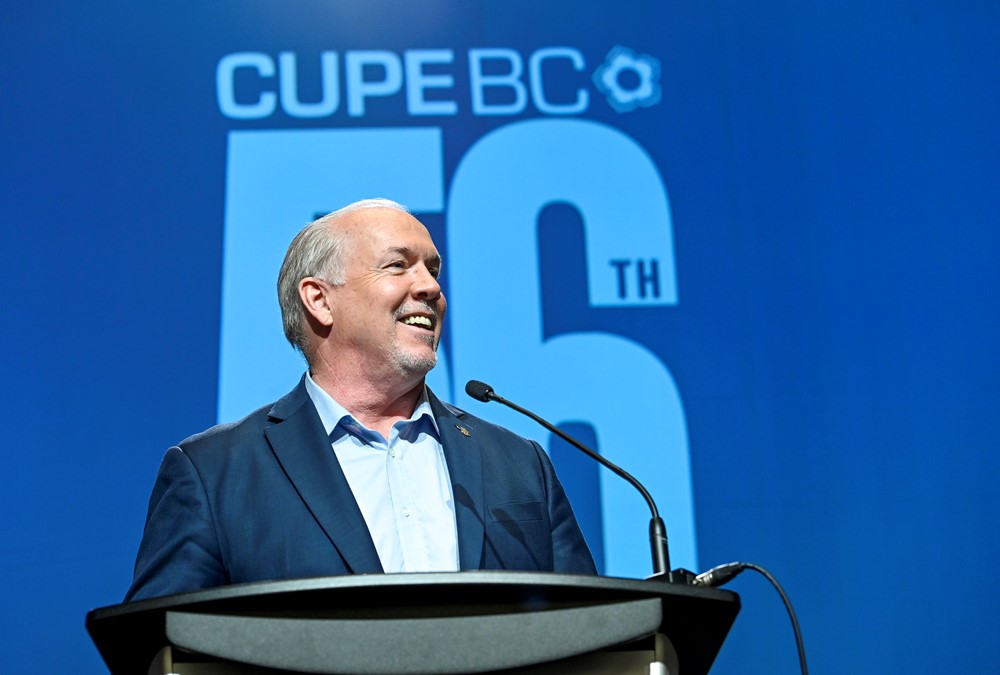 VICTORIA—Premier John Horgan arrived to speak at CUPE BC’s convention with a campaign-style entrance, and laid out many of his government’s accomplishments in its first 21 months in power.

“After nearly two years in government, our list of accomplishments is growing,” said Horgan. “We’re building more affordable housing, we’re delivering quality childcare, and we’re teaming up with our partners in education to give our kids the best possible start.

“We’re fixing public health care, we’re renewing the human rights commission, and we’re restoring workers’ rights. And if that wasn’t enough, we’re taking on some of the biggest challenges facing our province.

“We’re pursuing meaningful reconciliation with Indigenous peoples, because B.C. cannot truly prosper until First Nations are full partners in our future. Reconciliation is the only way to heal the past and right historical wrongs. It’s the only path forward to certainty on the land base.”

Horgan also spoke about the BC NDP government’s actions to fight climate change, including the creation of CleanBC.

“Our government is taking bold action on climate, the greatest challenge of our time. Instead of ignoring the problem, we are building climate action into everything we do. CleanBC is our roadmap to a cleaner province, a more sustainable economy and a better future for people.

“And we are doing all of this while maintaining balanced budgets, a AAA credit rating and the fastest economic growth in Canada.”

Horgan warned delegates that the BC Liberals and their wealthy and well-connected supporters are desperate to return to power, and asked for the continued support of CUPE members.

“We may run into the occasional disagreement,” said Horgan. “But I’ve got your back. I will continue to be your partner in progress, and our government will keep fighting for people.

“Working together, guided by our shared values, we will build a better B.C. for everyone.”